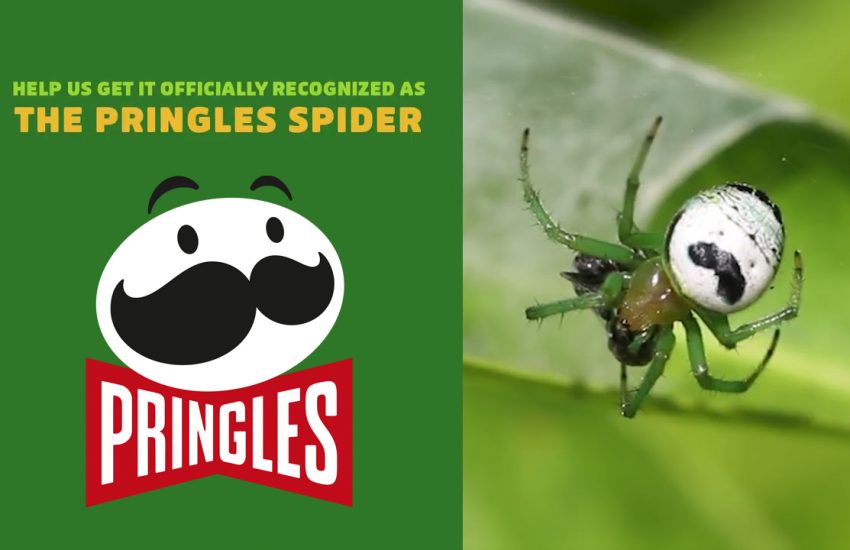 What do spiders have to do with potato chips? Apparently much more than previously realized. In fact, there’s a little known species of spider who bears a striking resemblance to the Pringle’s potato chip logo. Recently someone noticed, and this unsung arachnid emerged from the shadows to discover its claim to fame.

The Araneus Mitificus, or more commonly known as the kidney garden spider, is a part of the orb weaver species that has quietly lived below the radar in parts of southern and eastern Asia. Its markings are so similar to the familiar logo – right down to the beady black eyes and moustache – that Pringle’s is lobbying to have the spider’s name officially changed to the “Pringles Spider.”

“One look at this incredible spider and it hits you – that spider looks just like the Pringles logo. Once you see it, you can’t unsee it,” said Kellogg’s in an issued statement.

Pringles is urging fans to sign a petition in favor of the name change, which must be approved by the International Society of Arachnology to become official. If the appeal is successful, the first 1,500 signers will receive a free can of Pringles.

The campaign is even going so far as to hire influencers to begin sharing a 90-second promo starting June 28. Followers will have the opportunity to back the effort by “adopting” their own virtual Pringles Spider.

Whether the International Society of Arachnology will be persuaded remains to be seen. Go here to follow this developing story.